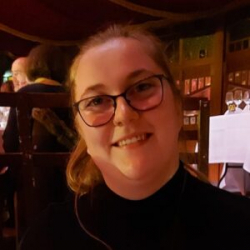 Bethany Gerrish
Beth is a dedicated and passionate writer, with a deep love of gaming. It was only a matter of time before the two collided and with a slight Genshin Impact obsession, writing about the game was the most logical next step! Open world and RPG's have always been a favourite of Beth's, but Genshin Impact has been a long-running favourite since picking it up for the first time. As a soon to be university graduate with a bachelor's in Journalism, Beth is taking her first steps into the real world of digital journalism and is looking forward to meeting lots of new people and writing many informative pieces for you to enjoy!

When it comes to merch, you want to be able to find the best pieces possible at the best price possible, add Genshin Impact into the mix and you can very quickly become swamped with copies of copies of merch designs, making it very difficult to decipher what’s worth your money. Although there is an official Genshin Impact merch site, anyone is allowed to make and sell Genshin merch, so there is a lot to get through.

Luckily, I’m a little bit obsessed with showing off my Genshin Impact obsession through merch, so I’ve trawled through the internet and found some of the best Genshin Impact Keychains you can buy. I hope your car keys and backpack zippers are ready to rep Teyvat in all its glory!

The Key(chain) to my Heart

Of all of the keychains on this list, I think my favorite has to be the Genshin Impact Seelie Charm Keychain. It’s been sitting on my keys for almost a year now without so much as a scratch, and it looks so pretty while still being distinctly Genshin-related. Just don’t make the same mistake I did and peel off the blue protection backing straight away!

The Key to the Best Keychain

When it comes to any merch, I never want it to just scream, “Look at me, I play Genshin Impact!” I think the more subtle pieces of merch can be used in more situations, and this also extends to keychains. The best keychains will look good to anyone who isn’t in the know whilst telling other Genshin Impact fans that you are one of them. If you know, you know, y’know?

The quality of the product is also really important when considering keychains. When they’re on keys or backpacks all day, every day, they’re going to take a beating after a while, so you want a good quality material like acrylic or metal to really get the most out of your keychains.

Finally, I want my keychains to be affordable. If I’m paying more than $25 without shipping for a keychain, it had better be the best damn keychain I’ve ever seen in my life. At the end of the day, you don’t want a singular keychain to break the bank. It just needs to look good and last long whilst representing the game you love.

Top picks at a glance

We all know you’ve got resin to spend, so if you need to read quickly to beat the resin cap, here are the best Genshin Impact keychains at a glance

These keychains are super cute, and just about every Genshin Impact character is represented. Being made out of acrylic means that these keychains should be able to take a beating whilst still looking good! These keychains are based on the chibi emotes you can annoy your friends with in-game, so they will make a perfect gift to any notorious emote spammer.

For those of us who missed the first Lantern Rite Festival (like me!) and the many more who missed Genshin Impact’s first-anniversary event, you too will know the pain of only having one or no Seelie’s to accompany you on your journey through Teyvat. Thankfully, Etsy user CitasPaintbox has come to our rescue with a Seelie Keychain that can accompany us on our real-world Daily commissions.

This keychain has been sitting on my keys for almost a year now, and it still looks as good as the day I received it. Let me tell you, my handbag is essentially a graveyard where small items go to die, so the fact that they’ve been on there attached to my mess of keys and still looks pristine is really saying something.

This may be partly due to the fact that I kept the protective blue backing on for months after receiving the keychain. I never claimed to be the smartest cookie in the jar, okay?

Regardless, this is a fantastic keychain. I love the holographic effect it has, I love how durable it is, and I love that I can own a pink Seelie even though I chose the purple one in the game.

There’s nothing like the adrenaline rush of pulling a five-star character, and these keychains perfectly bring that feeling back by showing the character frames as though they appeared in a 10-pull. Being made of a metal alloy makes these keychains extra durable, and considering that they’re relatively long for a keychain and have a small charm hanging off the end, durability is key (chain).

Unfortunately, not every five-star character is represented here, but fan favorites like Zhongli, Klee, and Xiao are available. Childe even gets his very own silver metal, unlike everyone else who gets a golden edge, so everyone’s favorite Snezhnayan boy is really going to stand out from the crowd.

For those who like a practical keychain, this BooTao Bottle Opener is perfect for cracking open some of Diluc’s finest Dandelion wine, or maybe some Osmanthus Wine to see if it still tastes the same as you remember.

HuTao’s little ghost companion is here to help gnaw open any bottles you have, and boy, does he look cute as he does it! This gold-plated enamel keychain is more than up to the job of opening any capped bottle, and you can take it with you anywhere!

If the weapon banner hasn’t been kind to you, skip the RNG process entirely and just buy your weapon of choice as a keychain! These weapon keychains are a sleek way for any Genshin fan to show off their love of the game, and who doesn’t want to carry around a tiny Staff of Homa? Being made out of metal alloy makes these tiny weapons durable, but don’t worry about any cuts or scrapes. Unlike real weapons, these ones are totally blunt and safe for your keys!

These wooden Constellation charms are a fantastic way to represent your favorite 5-star character. The wooden material is sturdy, though I’d try to avoid getting this one wet in case it makes the wood swell. The constellation design on these is amazing; with the stars getting bigger, the more constellations there are.

I also like the addition of the constellations name, which really pulls the look together. With 21 different characters to choose from, there’s something for everyone here.

These keychains are just so damn cute. I absolutely love the cutesy chibi style, and these keychains are large enough so the smaller details aren’t obscured. There’s a large array of both 5-star and 4-star characters to choose from, and unlike other keychains from the official Genshin Impact store, there isn’t one character with a different color border and clasp, so if you get more than one, they’ll definitely all match!

Genshin Impact Vision Glow In The Dark Keychain and Pin

You’re really getting your money’s worth with this keychain, and being one of the more expensive ones on this list, I should think so too. Not only are you getting a keychain, but these double as a pin badge too.

These keychains are fully customizable, so you can either design yours after your favorite characters’ vision or make one that’s entirely new! If this wasn’t enough, these keychains can glow in the dark, which is a fun feature that not many keychains have.

If the other items on this list are a little too hard for your liking, then this is the keychain for you. This keychain features Azhdaha as a cute round plush friend to protect your keys from any threats. Of course, being plush means that this keychain is going to be less durable than any metal or acrylic ones, and I’d definitely avoid getting him wet to keep him as pristine as possible.

If a plush Azhdaha didn’t sound sweet enough, you have to option to get him in an angry version, where he has a smoother plush body, or a confused version, where he is more fluffy and snuggly. There is no right or wrong choice; both are equally adorable.

Though the summer adventure event may be over, the fun we have with Klee’s best pal Dodoco doesn’t have to stop! This Acrylic print keychain is super cute, and you can feel like Klee as you run around with it on your backpack! Just maybe refrain from bombing any fish.

I love the little clover charm linking the keychain to the clasp. It’s such a cute little detail that I’m glad wasn’t overlooked. Although this Dodoco isn’t as fluffy as Klee’s, it is just as cute!

This one’s for all the Untitled Goose Game fans out there. I’m not sure why someone decided to reimagine Venti as a problematic goose, but boy, am I glad they did. This keychain has such a fun yet intricate design featuring Venti’s iconic outfit and even his harp, just goose-ified.

The store has other goosey characters available, too, in case Venti wasn’t your cup of tea. Ganyu, Yelan, Xiao, Childe, HuTao, and the other two archons are all available in their goose forms and ready to cause trouble around Teyvat. You’d better link them to your keys quickly!

Question: Is there an official Genshin Impact Merch Store?

Answer: Yes! genshin.shop has merch from the flagship Genshin Impact store that is then delivered right to your door!

Question: Is it legal to make and sell Genshin Impact merch?

Answer: Yes! HoYoverse has guidelines on who can make and sell merch here, but the quick answer is that anyone can produce and sell Genshin Impact merch with no repercussions. There are only limitations on mass-producing merch, but most home sellers aren’t going to be doing that, so don’t worry!

Question: Which character is the most popular in Genshin Impact?

Answer: According to stats from the Spiral Abyss, Kazuha is what most people decide as their first choice. If we go by banner sales, then Ayaka was the highest grossing character in a single banner, but with a little math with rerun banners, The Raiden Shogun wins the popularity contest (though probably not by our wallets), earning HoYoverse over 66 and a half million dollars. If you’re looking for gift ideas for your Genshin fan, anything Shogun related is probably a winner.

There are a lot of Genshin Impact Keychains out there, but this lineup of the best ones should point you in the right direction to find the keychain of your dreams.

My personal favorite is the Genshin Impact Seelie Charm Keychain, I love its design and the sparkle it gives, and it’s so durable it barely has a scratch after sitting in my bag and being tossed around for months on end.

If there’s any keychain you go for, make it that one. I promise you won’t be disappointed!